Friends of the Alameda Animal Shelter 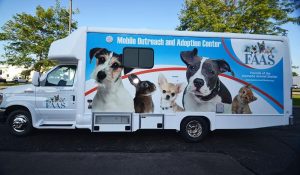 They call the City of Alameda "the Island City." Situated in the San Francisco Bay just between Oakland and San Francisco, the city itself spans across two islands, a small part of the mainland, and some minor islands.  Referred to simply as "the island" by locals, the city has just under 80,000 residents.  It's those residents and their pets that the Friends of Alameda Animal Shelter aims to serve every day.

On their website, the Friends of the Alameda Animal Shelter (FAAS) writes that it is an open-intake shelter that welcomes all homeless companion animals. Like most shelters, FAAS is a non-profit 501c3. However, it describes its model as unique in that it is a public-private partnership between FAAS and the City of Alameda. It has two locations on the island, with their main shelter at the north and a smaller satellite location at the south.

In addition to pet adoptions, it also provides a variety of other outreach and education initiatives.  For example, FAAS sponsors a Pet Loss Support Group once a month for pet owners who have suffered the loss of a pet. It's hosted by a licensed family therapist, and gives families the opportunity to share their grief or simply just listen to others' stories so that they don't feel so alone.  You know, I've written dozens of these client spotlights, and this is the first time I've come across a pet loss support group sponsored by an animal shelter. It really is a special program and demonstrates how dedicated FAAS is to supporting the members of their community.

With its innovative programs, community partnerships, and a passionate base of volunteers and donors, each year FAAS says that it saves on average 97% of the nearly 1,000 lost, abandoned, and homeless animals who enter the city’s shelter. 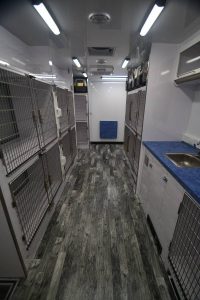 To further help with this mission, FAAS invested in a La Boit-built Mobile Outreach and Adoption Center, affectionately referred to as the "adoptamobile." The 26ft vehicle was first unveiled at the end of 2021, complete with a ribbon-cutting from the mayor. It features two exterior viewing windows, lots of cages for animal transport, and plenty of storage for events such as their pet food drives.

The plan for the vehicle first began to take shape a few years ago, when one of FAAS's long-time volunteers, Shelly Gable, helped kickstart the capital campaign to purchase the vehicle in honor of her dog, Synta. Shelly was highly involved at FAAS for many years, serving on the board and setting up another one of FAAS's unique programs, the Sasha Training Fund. The fund was set up in honor of another of Shelly's canine companions, her beloved German Shepherd, Sasha, who passed in 2013. It provides up to $200 in free canine training to new pet parents who adopt from FAAS.

Shelly Gable was instrumental in planning and fundraising for the Mobile Outreach and Adoption Center. Sadly, she passed from cancer in 2020 before she could see the final product. Shelly was known throughout the community as a tireless advocate for animals, and many people mourned her passing greatly.

John L. Lipp, CEO of the Friends of the Alameda Animal Shelter, said that "Shelly’s passion for animals and people made FAAS a better organization and it made all of us who knew and worked with her better people.  Her legacy and her vision will forever be a part of our community."

One friend wrote on Facebook, "There is a lot of extra tail wagging going on in heaven right now."

We like to think that Shelly is smiling as she looks down on the great work that the Friends of Alameda Animal Shelter are doing with their vehicle and all of their other programs. Especially when she reads notes like this:

“A fabulous group of dedicated animal lovers,” wrote one person on social media.

"The animals are extremely well taken care of," wrote another. "Hats off to each and everyone who works for this shelter.”

Shelly would be proud indeed.

Congratulations to Friends of Alameda Animal Shelter on your new mobile adoption center.

La Boit Specialty Vehicles offers a variety of vehicles to suit your needs, from 18ft pull-behind trailers to 40ft drivable coaches, none of which require a CDL to drive. Best of all, our vehicles are commercially-built from the chassis up for your specific needs, and are never converted RVs.

Helping professionals around the world confidently deliver a higher level of service to their local markets by providing the highest quality custom mobile units in the industry!