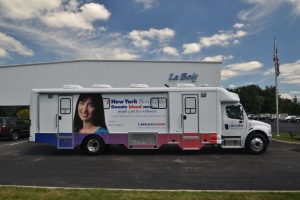 For the past five decades, the New York Blood Center (NYBC) has provided lifesaving blood products and services to nearly 200 hospitals in New York, New Jersey, Long Island, the Hudson Valley, and parts of Connecticut and Pennsylvania.

Operating under a four-part mission, NYBC provides high quality blood and stem cell products and related medical and consultative services to hospitals and patients. They conduct innovative research, develop products, technology and services with the potential to have a worldwide humanitarian impact. NYBC stands out as a multifaceted, patient-focused healthcare resource and a global change agent. Their goals are to improve public health, empower the communities they provide for as a resource and to maximize those resources through collaboration and partnership.

In pursuit of that mission, this year NYBC commissioned three additional La Boit-built bloodmobiles to add to their growing fleet, which already includes a La Boit unit from 2014.

The first unit is already out in the field diligently serving the greater New York area. The second unit is receiving final touches on the exterior graphics before it departs for the AABB Annual Meeting in Orlando, Florida in late October, after which it will be driven up north to serve the New York area with the rest of the fleet.

Each of the three bloodmobiles is built on a Freightliner M2 chassis and features four of La Boit’s signature donor beds per coach. NYBC required a lot of small customizations throughout their two New York units to make them suit their needs. 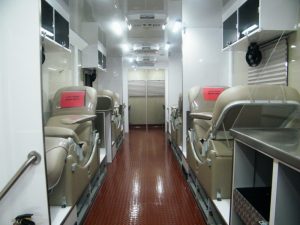 The third unit was built specifically for the Community Blood Center of Kansas City (CBC). The CBC and NYBC combined their operations in 2014, which allows them to build synergies in both their services and research capabilities.

Partnerships are a big part of how NYBC hopes to fulfill their four-part mission, and both organizations agree that they have benefited from that partnership. In the press release announcing the partnership, CBC Board Chair said, “This is an exciting day in the continuing development of CBC as an institution. Our partnership with NYBC will allow us to grow, remain state-of-the-art and move into exciting new areas.”

The CBC bloodmobile embarked on its maiden voyage on October 14th and has already had a positive reception from the community in Kansas.

We are proud to have the NYBC and CBC as a part of the La Boit family and wish them the best with their new La Boit vehicles!

La Boit Specialty Vehicles offers a variety of vehicles to suit your needs, from 18ft pull-behind trailers to 40ft drivable coaches, none of which require a CDL to drive. Best of all, our vehicles are commercially-built from the chassis up for your specific needs, and are never converted RVs.

Helping professionals around the world confidently deliver a higher level of service to their local markets by providing the highest quality custom mobile units in the industry!